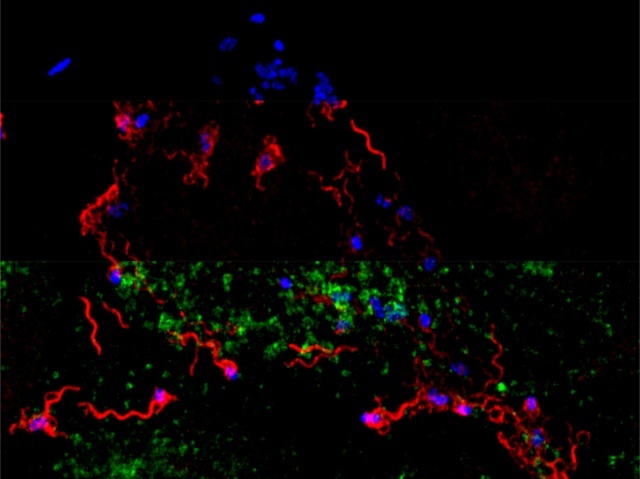 Differences between Salmonella bacteria types and how they affect infectivity

A common pathogen, the bacterium Salmonella enterica comes in many distinct forms, or serovars: most lead to unpleasant gastroenteritis, but some serovars, the typhoidal salmonellae, cause a more severe disease known as enteric or typhoidal fever. Despite sharing almost 90% of their genes, the typhoidal S. Paratyphi A (SPA) and non-typhoidal S. Typhimurium (STM) vary in how they behave inside cells cultured in the lab. After infecting a cell, STM are enclosed in specialised cellular compartments, Salmonella-containing vacuoles (SCVs), and downregulate genes associated with the flagellum, a structure bacteria use to swim around. By contrast, SPA (pictured in blue) maintain their flagella (in red), so can escape out of SCVs and move around. Alongside differences in metabolism and other virulence pathways, this enhanced mobility likely contributes to the more severe impacts of SPA infections. With no vaccine available and growing antibiotic resistance, understanding what makes SPA so dangerous could help suggest potential solutions.