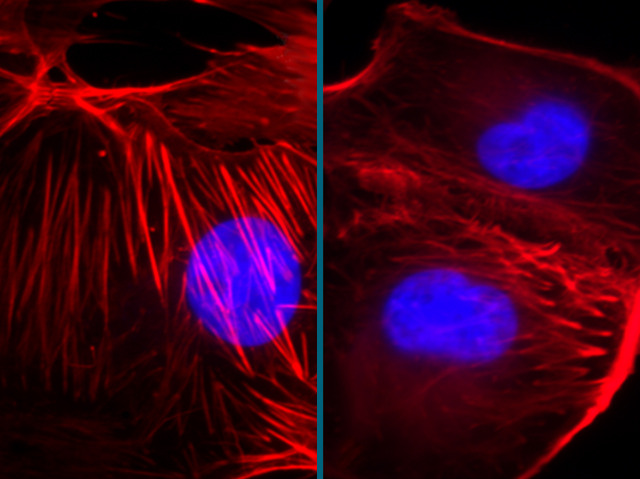 Ketamine – or ‘Special K’, as it’s often known on the street – is a powerful anaesthetic drug. Originally used as an animal tranquilliser, it’s sometimes used to treat people with certain psychiatric illnesses, and relieve cancer pain. But it’s also quickly become adopted as an illegal recreational drug thanks to its woozy ‘high’ and hallucinogenic effects. There’s a worrying dark side to the growing popularity of ketamine among fun-seekers – doctors are now seeing kidney and bladder problems in users. These images show kidney cells grown in the lab, stained with a red fluorescent dye that highlights the cell’s internal ‘skeleton’. The cells on the left are normal, while those on the right have been dosed with ketamine, which seems to break down the delicate structures. Figuring out how the drug causes bladder and kidney damage could reveal ways to help those who are suffering its long-term effects.