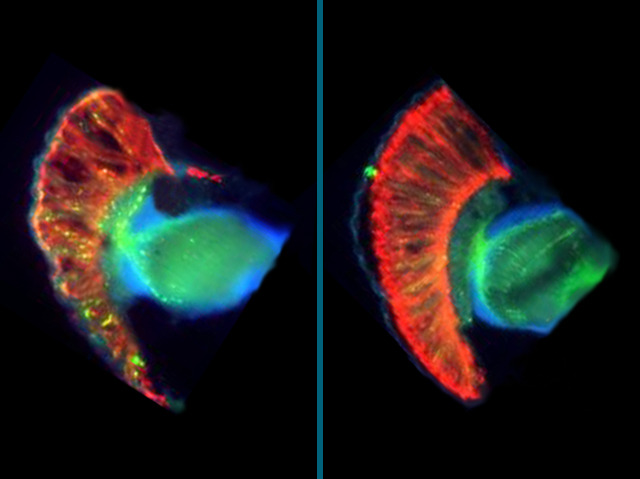 Both Down syndrome and Alzheimer’s disease are well known, but you may be unaware of the link between the two. In fact senior individuals with Down syndrome nearly always develop dementia. And this link has helped scientists identify the main culprit in Alzheimer’s disease – a protein called APP. When present in high levels among the brain’s neurons [nerve cells], this protein eventually causes damage. Here in the left-hand image, APP (bright yellow dots) is seen distorting neurons in a fly’s eye, creating ‘holes’. What remained more mysterious was the role of another protein also abundant in both Down syndrome and Alzheimer’s called DSCR1. Was it also harmful? Expressing DSCR1 alongside APP in fly’s eyes has now made clear that it actually protects against damage – restoring the retina’s uniform appearance (seen in the right-hand image). This insight opens up new pathways for slowing down or even curing Alzheimer’s disease.