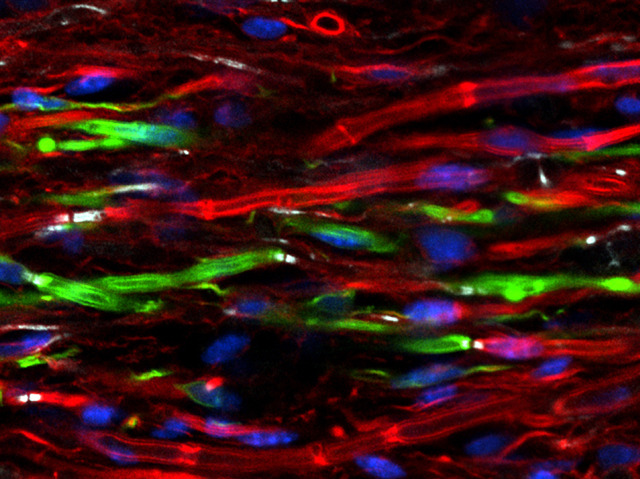 Nerve cells in our brains and bodies have long thin protrusions called axons, which transmit electrical signals both to other nerve cells and to body tissues. Wrapped around these axons are multiple thin layers of a substance called myelin, which not only protects the axons but also speeds up their signal transmission. Myelin is itself a type of cell called a Schwann cell and, if myelin becomes damaged by physical injury or disease – such as multiple sclerosis – the Schwann cells attempt to re-myelinate the axons. But the process is often insufficient and the damaged nerves might never fully regain their function. Researchers would thus like to enhance the natural re-myelination process to help damaged cells recapture their lost potential. A new technique that allows re-myelinating Schwann cells (stained green) to be distinguished from undamaged myelin (stained red) should help researchers understand the process and ultimately design treatments to improve it.