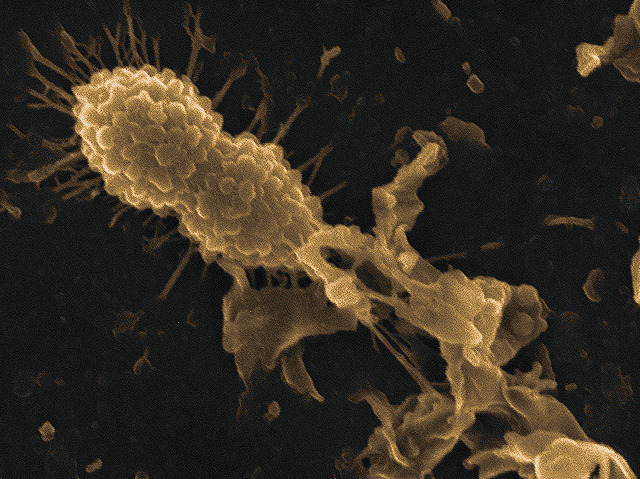 In some versions of the Superman story, Kryptonite strips the great hero of his powers, leaving him as vulnerable to attack as any mere mortal. Do ‘superbugs’ – bacteria that have evolved resistance to antibiotics – have a similar Achilles’ heel? Researchers have discovered that a protein in human milk called HAMLET has the power to reduce this resistance. By disrupting the cell membranes – the sacs that hold a cell’s contents inside – HAMLET can weaken bacteria. Its effects are so pronounced that even resistant strains of the pneumonia-inducing Streptococcus pneumoniae and the notorious MRSA can be made once again susceptible to antibiotic attack. Pictured are two S. pneumoniae cells; one (top left) healthy, and one (bottom right) wrecked thanks in part to HAMLET. Antibiotic resistance is one of the great villains of modern medicine. HAMLET could allow doctors to prescribe smaller concentrations of antibiotics, and maybe even vanquish the superbugs for good.