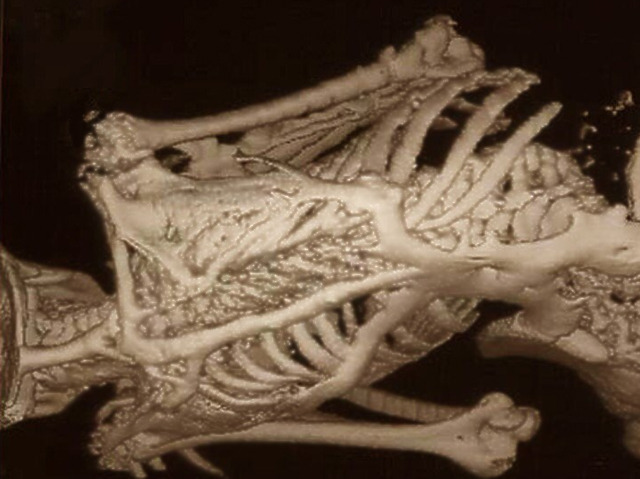 One in every two million people suffers from fibrodysplasia ossificans progressiva (FOP), in which injury-damaged muscle, tendons, and ligaments are replaced by bone. Even slight bumps result in ossification and, eventually, the accumulation of extra-skeletal bone (pictured here in a computer-generated reconstruction of a 12-year-old patient) makes movement impossible. The disorder is caused by a mutation in a gene that makes a cell surface receptor for bone morphogenetic proteins (BMPs), which can induce cells to initiate bone growth. It’s this process that appears to be overactive in FOP patients. So when stem cells arrive to regenerate damaged soft tissue, they recruit too many BMPs and turn into bone instead of new soft tissue. However, when researchers used a technique called RNA interference to suppress the mutant gene in stem cells, BMP recruitment was reduced to normal levels. This approach could potentially be used to treat FOP.