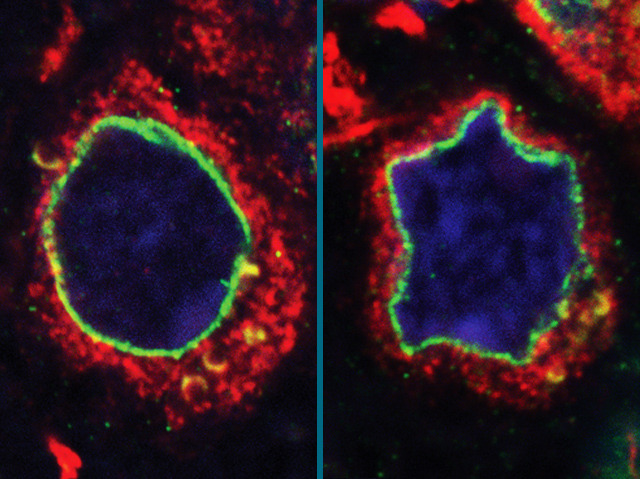 In the long-running investigation into the causes of Parkinson’s disease, scientists have a new lead: defects in the nuclei of brain-cell precursors. Post-mortem analysis of brain tissue from Parkinson’s patients revealed a high proportion of neurons [nerve cells] with deformed nuclei, suggesting nuclear deterioration plays a role in the disease. Researchers suspect the distortion might be caused by mutation in the LRRK2 gene that correlates with Parkinson’s, so they put the theory to the test. As induced pluripotent stem cells derived from patients became brain-cell precursors, nuclear architecture slowly deteriorated until they were clearly misshapen (pictured right) compared to healthy controls (left). The mutant cells also failed to mature into neurons. When the LRRK2 mutation was corrected, however, nuclei developed normally. Treating the brain-cell precursors with a particular compound achieved the same result, raising the possibility of a drug to reverse the problem and treat the disease.