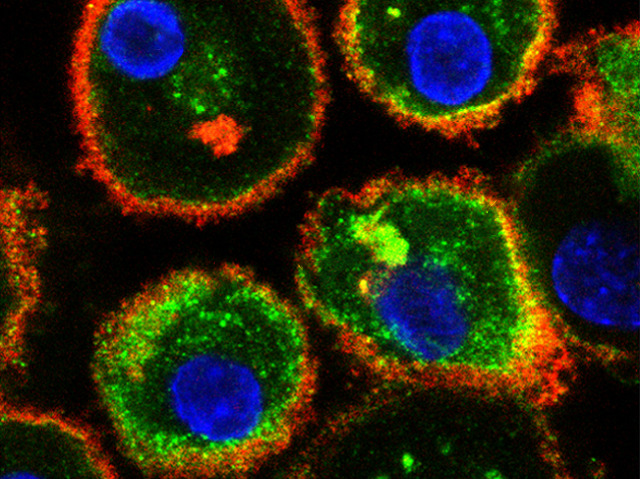 An estimated 34 million people worldwide currently live with AIDS, a disease of the immune system caused by the virus HIV. Infecting the white blood cells that normally defend us against disease, such as lymphocytes and macrophages, this virus also neutralises the body’s antiviral weapons at the molecular level. One such weapon is tetherin, a protein that binds to virus particles and tacks them to the cell membrane, preventing their release into the bloodstream. Pictured are macrophages (nuclei stained blue) in which the immune response has been activated. Tetherin (in green) is seen alongside a protein (in red) that’s highlighting the membrane compartments where HIV particles are assembled before release. But HIV evades tetherin’s grasp with a weapon of its own – a protein called Vpu – which stimulates degradation of tetherin. This adaptation may have been a key step in the successful spread of HIV-like viruses in primates to human hosts.