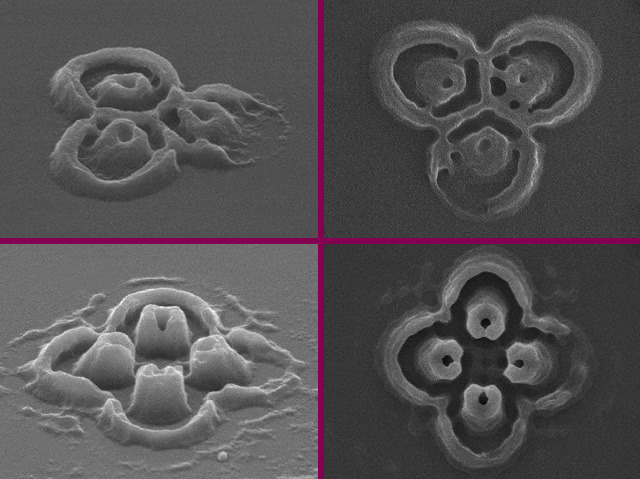 Creating new nano-devices like drug-carrying nanoparticles and microscopic needles requires just as much imagination in manufacturing as it does in design. Nanolithography is a technique that uses light to carve tiny 3D structures out of light-sensitive materials, pictured here shaping valleys and peaks 400,000 times smaller than sandcastles – shown from the side (left) and top (right). It’s a proof of principle for a sort of nano-scale factory, one which uses polystyrene nanospheres a bit like lenses, to shape the final designs. Passing light beams at different angles into the nanospheres scatters the cutting light in different ways, allowing the designs to be customised (compare the top and bottom images here). Scaling the operation up could be a simple matter of adding more nanospheres to the sculpting surface – allowing rapid manufacture of nano-nozzles, needles, and particles in huge numbers, but each small enough to deliver drugs into a single diseased cell.