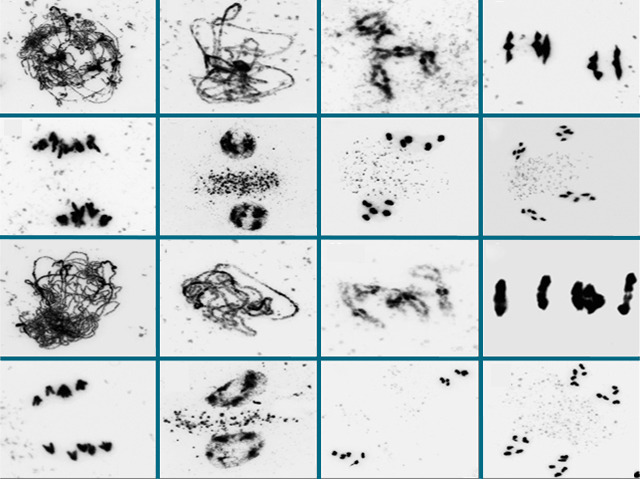 Meiosis is the unique kind of cell division that results in cells that contain half the amount of chromosomes [bundles of DNA] – in humans that's 23 compared to 46 in standard cells. When human maternal and paternal sex cells, each with 23 chromosomes, fuse during fertilisation the resulting cell has 46. All sexually reproducing organisms perform meiosis – including plants. A plant called Arabidopsis is widely used in genetic studies. Pictured are stages of meiosis in the plant. Chromosomes are seen as dense black objects, and unfurled DNA appears stringy. The top set of eight panels is from studies of a normal cell; while the bottom set is from a cell with a mutated chromosome-assembly factor. Although a normal process of meiosis was seen in this instance, the resulting daughter cells showed a decrease in their fertility. Knowledge of genetic detail in Arabidopsis readily translates to other species.