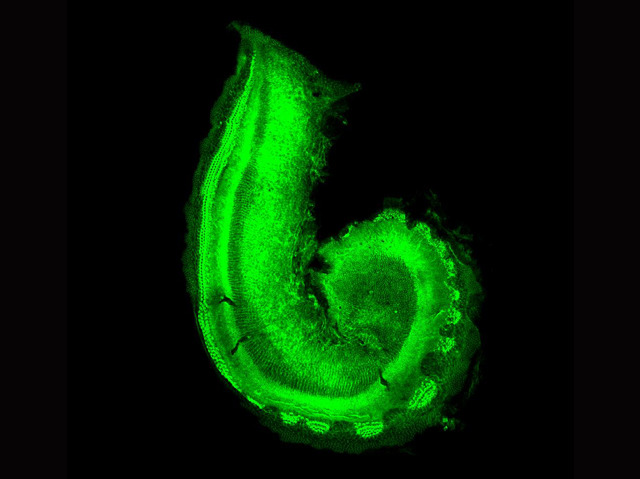 New life often develops from cells 'talking' to each other. Inside the womb, a winding spiral of sensitive cells called the cochlea forms inside the developing ear. Its growth is guided by chemical messages known as FGFs, sent back and forth between the building blocks of the cochlea and the supportive tissue underneath. In this cochlea, from a mouse’s ear, important FGF signals have been blocked leaving the spiral shortened – the smooth tissue seen at the top becomes cracked and lumpy as it bends. Hair cells along the cochlea (artificially coloured green) vibrate to turn sounds into electrical messages bound for the brain; a shorter spiral affects the range of pitches that ears can hear. Researchers are hoping to manipulate FGF signalling in laboratory-grown human cells. Producing new cochlea cells – which the adult body is unable to do – may help to correct hearing problems that are currently thought irreparable.