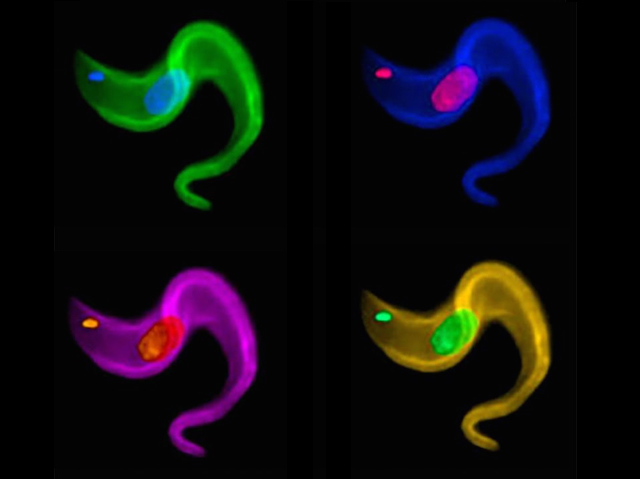 African trypanosomes, responsible for serious illnesses such as sleeping sickness, are sneaky parasites. To slip beneath the radar of their hosts’ immune systems, they regularly change their appearance, preventing recognition by altering the proteins that coat their surface, known as variant surface glycoproteins (VSGs). Trypanosoma brucei, pictured with alternative VSGs in different colours, dedicates a large proportion of its genome to this shape-shifting behaviour, with a vast library of over 2000 genes encoding VSGs. At any one time, only a single VSG is active, yet switching them around is crucial to the parasites’ survival inside the host. A recent study has shown that they achieve this through chromosomal recombination, moving genes around between strategically-placed short sections of repeated DNA. Through this process, a silent VSG gene can be translocated to a more active area of the genome, producing a new surface protein to mask the parasite’s identity.