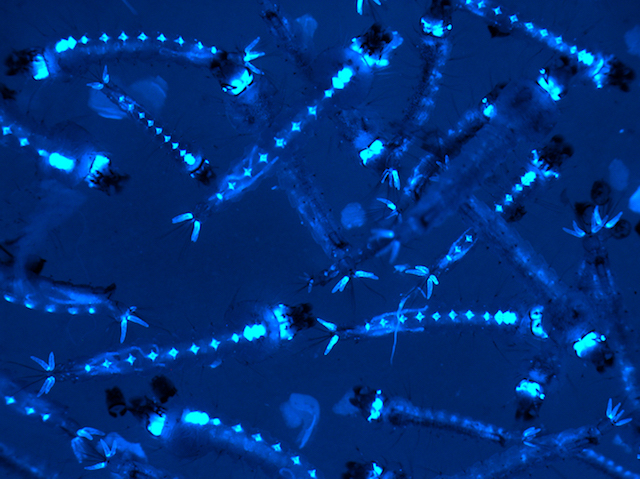 Mosquito bites can cause more than just intensely itchy swollen red lumps, they can spread a variety of diseases, most notably malaria, which kills several hundred thousand people each year. The malaria-causing parasite, Plasmodium falciparum, resides in the insects’ guts and transfers to humans during biting. While there are medications to fight the parasite, and insecticides to fight mosquitoes, both the microbes and insects are developing resistance. An alternative strategy in the on-going arms race against malaria is to create genetically-engineered mosquitoes (like the glowing larvae pictured) that resist P. falciparum infection. These mosquitoes have had their immune systems genetically tweaked to improve their parasite-fighting abilities. Encouragingly, unlike many genetically-modified organisms, the immune-enhanced mosquitoes are as fit as wild mosquitoes and have increased reproductive success. This means that, if the engineered insects were released into the environment, their beneficial parasite-eliminating genes should spread rapidly throughout natural populations.