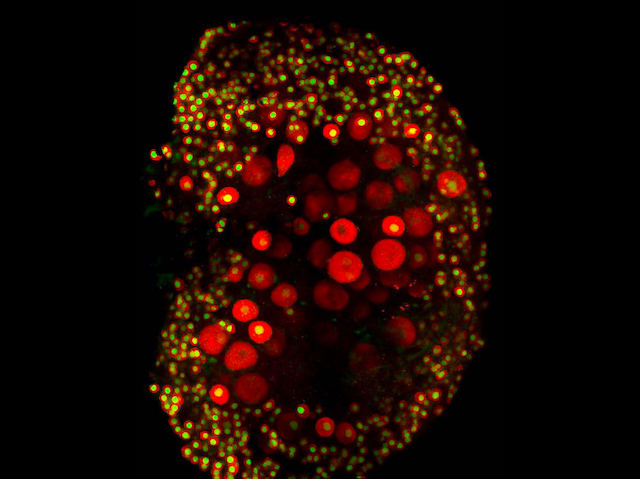 Women are born with egg cells called oocytes that mature later in life, one during each menstrual cycle, ready to be fertilised. This mouse ovary shows its own precious oocytes, artificially coloured in red with yellow nuclei. Unfortunately, oocytes are often damaged when treating cancer with chemotherapy, leaving many women infertile. But there is hope. Chemotherapies often work by causing cancer cells to self-destruct – scientists found something similar happening inside oocytes as a side effect. Usually a protein called CHK2 only switches on in oocytes with damaged DNA, to prevent them from being fertilised – but chemo switches it on in all the healthy ones too. By temporarily blocking CHK2 with a drug, researchers saved the healthy smaller mouse oocytes (like those bottom left) that would otherwise have perished. In the future, similar drugs may be offered to female cancer patients, perhaps providing hope of a new family after their recovery.