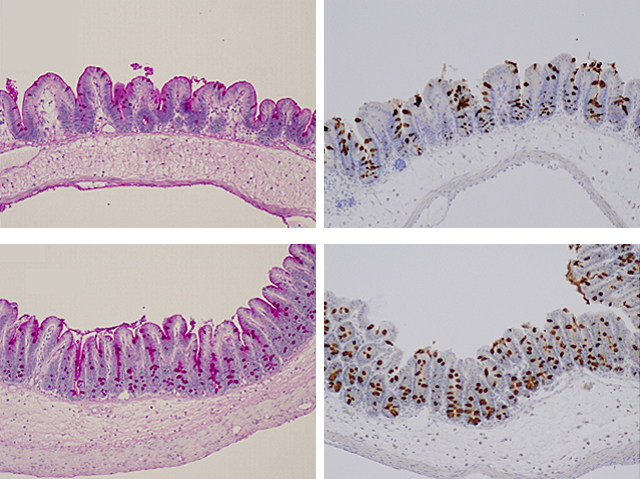 We usually think of bacteria as ‘bad’, causing infections and making us ill. But our bodies are also packed with ‘good’ bacteria that help to keep us healthy. By studying mice, scientists have discovered that reducing the number of different bacteria in the gut increases the chances of severe parasitic infections by affecting the production of protective mucus that normally prevents parasites from getting into gut cells. These images show cross-sections through the wall of the gut, stained with pink or brown dyes that highlight mucus-producing cells. The animals sampled in the top two panels were treated with antibiotics to kill off some of their gut bacteria. They have far fewer mucus-producing cells than untreated animals (lower panels) and are more susceptible to catching Entamoeba histolytica – the parasite that causes amoebic dysentery. If this battle also happens in human guts then boosting bacteria could be a way to protect against parasites.