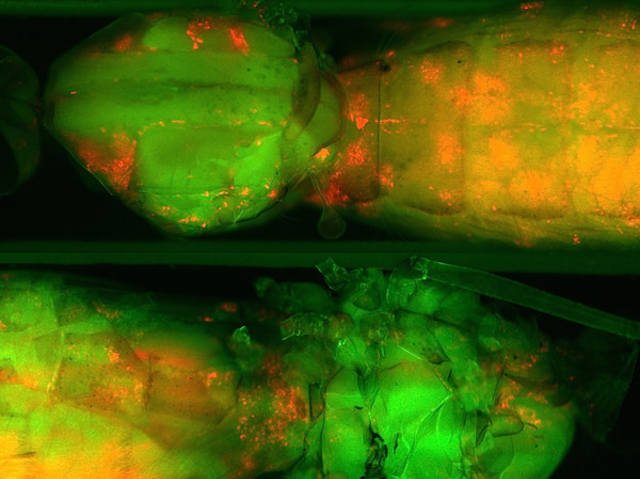 Can we fight one infection with another? That’s a question that researchers in Australia are trying to answer, by infecting mosquitoes – which can carry the virus that causes dengue fever – with insect-specific bacteria called Wolbachia. Seen here as red splotches inside green-stained mosquitoes, viewed under a fluorescence microscope, the bacteria cause a problem known as cytoplasmic incompatibility, where larvae produced by infected males mating with uninfected females fail to hatch. Although tests under lab conditions suggest that deliberately infecting mosquitoes with Wolbachia could be a good way to keep them under control and halt the spread of deadly mosquito-borne diseases, this hasn’t been tested in real life situations. By tracking the spread of Wolbachia infection in wild but dengue-free mosquitoes in northeastern Australia, scientists have shown that the bacteria slowly but surely spread through the insect population, and could prove to be a good way to control them in future.