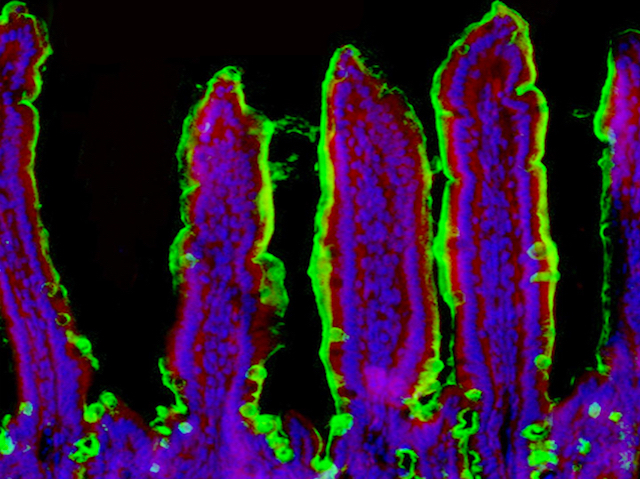 Irritable bowel disease (IBD) is a common condition that causes stomach cramps, bloating, and diarrhoea/constipation, and its exact cause is yet to be identified. A combination of both genetic and environmental factors was thought to be the culprit, but recent research found that the cause is predominantly linked to environmental factors. When looking into IBS in mice, scientists uncovered that recurrent bacterial infections caused by mild food poisoning (such as Salmonella) triggers inflammation in the intestines, which progressively worsens with additional infections. Diving deeper, they found that Salmonella bacteria activated the production of an enzyme called Neu (pictured in green on the surface of the intestinal epithelial cells, which are stained blue), which in turn caused deficiency in a key enzyme, IAP, usually produced in intestinal tissue to detoxify normal gut bacteria. These findings could help to aid preventative approaches for IBD.