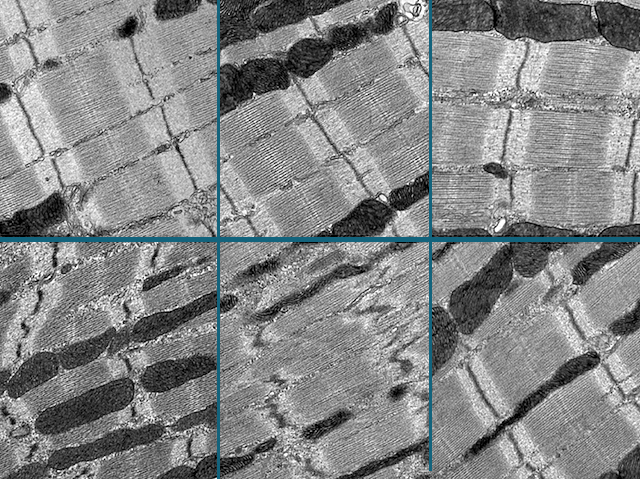 When the heart beats, the contractions of cardiac muscles are regulated by the movement of calcium ions between different compartments of the heart cells. Problems with this calcium cycling are key features of heart disease, including dilated cardiomyopathy (DCM), a common cause of heart failure characterised by enlarged heart chambers and stretched cardiac muscles. Pictured are electron micrographs, showing the cardiac muscle fibres of healthy mice (top row) and mice with a condition resembling DCM (below). Recent research suggests that a protein called DWORF can alleviate some symptoms of DCM: without DWORF, the muscle fibres of DCM mice are disorganised (bottom left panel) while their structure is restored when DWORF is over-expressed (bottom right). DWORF is thought to stimulate the activity of a critical calcium pump, named SERCA, by outcompeting its natural inhibitors. As this helps boost calcium shuttling, DWORF could be a promising new tool for treating heart disease.