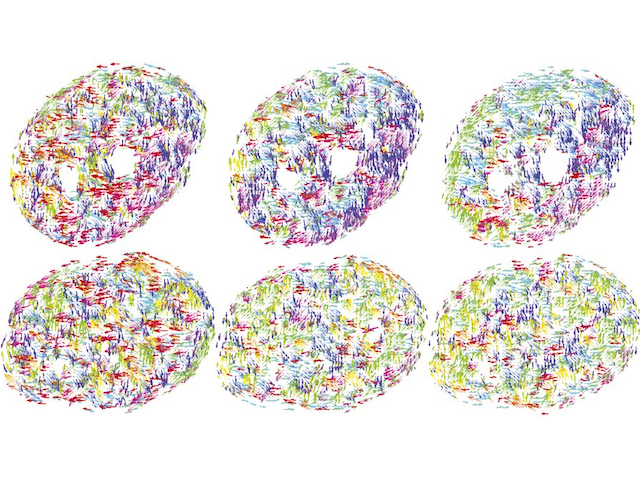 Studying the movements of DNA in the cell nucleus

Our genes – the snippets of DNA that make us who we are – are wrapped up in spools of chromatin floating in the nucleus of our cells. A bit like a conga line, loops and bends in the chromatin bring distant genes closer together. Here a technique called displacement correlation spectroscopy picks out regions of chromatin moving in the same direction in rainbow colours. Looking at 'slow' movements over 2.5 seconds (top middle) or 10 seconds (top right) reveals that DNA is often 'dancing' in the same direction, shown as similarly-coloured areas in the nucleus. These patterns disappear when looking for faster movements (top left) suggesting a graceful sway rather than a frantic mosh. Depriving the dancing genes of cellular energy ATP, disrupts the party (bottom row) – giving further clues about these new ways in which genes may come together in health and disease.