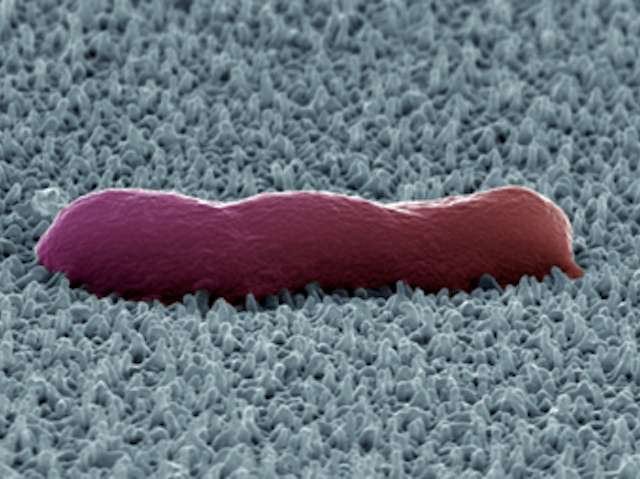 Tiny spikes on surfaces to deter bacteria from lingering

Did you know that most street furniture – park benches and the like – is specifically designed to be uncomfortable, to deter people lingering too long? It seems nature has a similar design philosophy, and has developed certain surfaces to be particularly unwelcome to unwanted visitors, such as bacteria. Dragonfly wings are like a microscopic bed of nails, and any bacteria that tries to settle in finds itself ripped apart by tiny spikes. Bacteria-deterring surfaces would be ideal for medical implants such as hip replacements, which are prone to infection, so researchers have developed synthetic materials covered in similar 'nanospikes' (pictured, with an E. Coli bacterium snared in the trap). Physical deterrents like this are particularly promising because they even work against the growing array of bacteria resistant to antibiotics. In the face of a looming antibiotic crisis, this could be a very important new tool waiting in the wings.