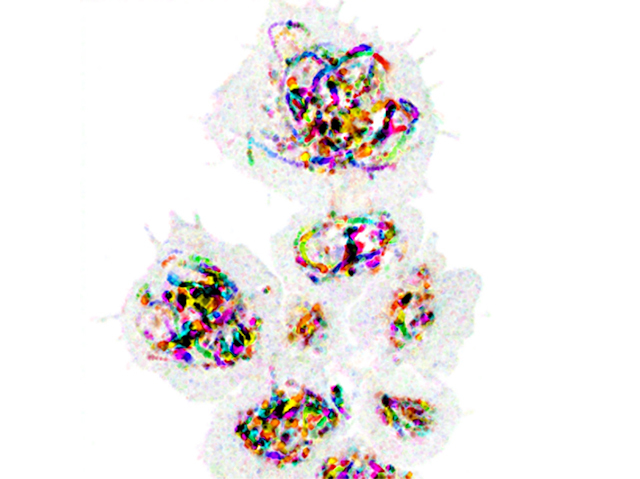 Also known as oculocerebrorenal syndrome, Lowe syndrome is a rare genetic disorder that causes a range of eye, kidney and brain problems such as seizures. It’s due to faults in a gene called OCRL, but until now it’s been unclear exactly what the gene does or why the faulty version causes such diverse symptoms. By studying the equivalent gene in fruit flies, scientists have discovered that OCRL is involved in making and moving tiny molecular packages inside cells, known as endosomes. This time-lapse projection shows the endosomes in healthy fruit fly immune cells, with each one digitally coded with a different colour and followed for just four minutes. Without OCRL, the immune cells are activated when they shouldn’t be, releasing their endosomes and causing inflammation. If the same thing happens in human cells, inflammation in the brain might explain the seizures and other symptoms seen in children with Lowe syndrome.