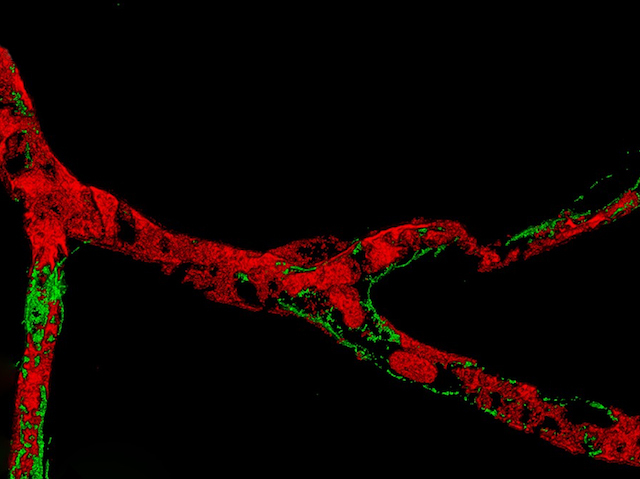 Every inch of the human body is serviced by a network of blood vessels. Its metaphorical motorways are arteries and veins, while its many capillaries are its byroads. Together they deliver vital nutrients to tissues. In the brain and retina, capillaries contract or relax depending on how much nutrition is needed. Cells surrounding capillaries called pericytes are suggested to enable this, most likely using proteins such as alpha-smooth muscle actin (SMA). In mouse retina, researchers reveal for the first time the presence of alpha-SMA in capillary pericytes (pictured). The retina was rapidly frozen using ice-cold methanol before imaging under a microscope; this helped ensure alpha-SMA wasn’t lost from the tissue. Alpha-SMA (red) levels were even higher in capillary pericytes (green) treated with a drug that stabilises actin. Piecing together how capillaries contract may provide clues to damage caused in stroke, which is caused by reduced blood flow to the brain.