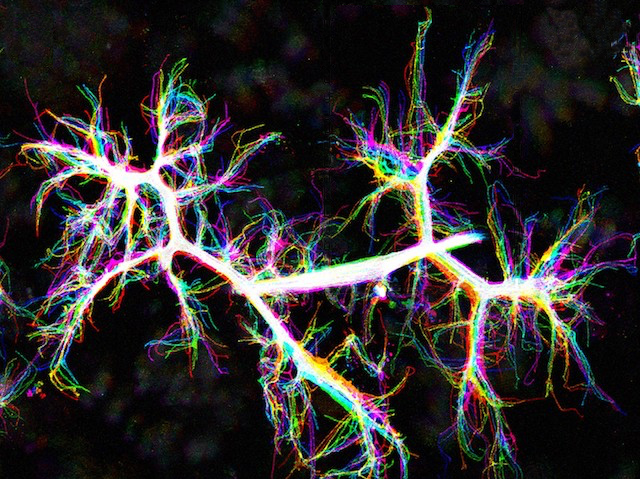 When blazing trails across unchartered territory, why do some paths peter out abruptly while others become well established routes? Researchers ask this of nerve cells extending their branches into developing tissues. Fruit fly pupae were genetically altered to fluorescently label their nerve cells. Live in vivo imaging (pictured), with snapshots taken every two minutes (each coloured differently), revealed growing nerve cell branches. Proteins found in synapses – connections between nerve cells – are implicated in branch growth. The team confirmed this as they found a protein marker for synapses accumulated at branch points, although active synapses were not found here. Next they focused on two synaptic proteins that are important for synapse formation, neurexin and neuroligin. Mutants lacking these proteins had nerve cells with shorter branches covering smaller areas of tissue. When it comes to trailblazing across tissues, neurexin and neuroligin therefore stabilise branches, without the need to create functional synapses.