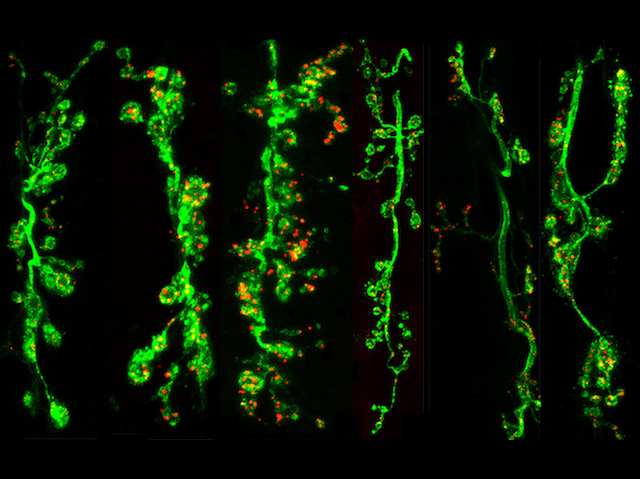 Lightning, engines revving and nerve cell communication all have something in common: nitric oxide. When produced in nerve cells nitric oxide is known to affect the release of chemical neurotransmitters at synapses – the junctions across which a signal is transmitted from nerve to nerve, or nerve to another tissue. Researchers investigate how in fruit fly larvae at special synapses called neuromuscular junctions (NMJs; the nerve, shown in green, with side branches to the muscles). They found that exposing NMJs to nitric oxide, or by mimicking its chemical effects, increased interactions (red) between a protein called complexin and two proteins called SNAREs that are vital for neurotransmitter release. Piecing their findings together, the team suggest the chemical alterations nitric oxide makes to complexin allows complexin to grab hold of the SNAREs, so hampering signal passage. So nitric oxide at the synapse ultimately dampens neurotransmitter release, thereby regulating communication between nerve cells.