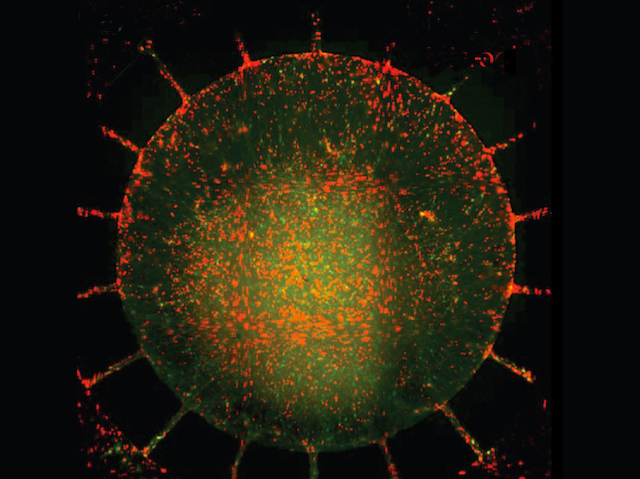 Recreating factors involved in Alzheimer's disease with a lab-grown model

A stage of battle 30,000 times smaller than a roman amphitheatre, this microfluidic device recreates the microscopic events of Alzheimer’s disease. Ageing brains often build up waste proteins – gunky amyloid plaques and tangled tau proteins. Although these can interfere with signals between brain cells like those seen here (highlighted in green), they may also build up harmlessly for decades. The real problem is how the brain responds – microglial cells (red), part of the brain’s own immune defences, flood towards affected areas of the brain (or down the spindly channels here) and attack the struggling neurons. While the overzealous defenders attempt to get rid of the plaques, levels of neuroinflammation rise, causing irreparable damage. This lab-grown model can now be put to use in finding new ways to stop plaques from forming in the first place, but also testing drugs designed to calm the microglial cells of those at risk.