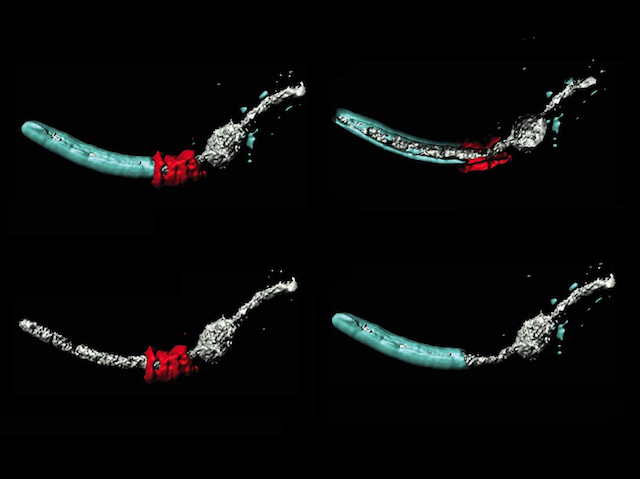 In the fight between immune cells called macrophages and Candida albicans fungal infection, macrophages are sometimes the underdogs. That’s because C. albicans can form lengthy projections – hyphae – that are longer than the macrophages. And in people with weakened immune systems, hyphal C. albicans infection can even prove fatal. Researchers investigated what happens when a macrophage meets its outsized prey by culturing them with fluorescently labelled hyphal C. albicans (white). Adding the substance con A (green), which binds the surface of the fungus, allowed them to mark the parts that weren’t engulfed. The protein actin (red), which gives macrophages their structure, was also labelled for fluorescent microscopy. Resulting 3D reconstructions (pictured) revealed that macrophages construct actin cuffs around hyphae. So despite being too small to devour entire fungi, macrophages grab what they can and tightly seal around it, enabling them to target the release of their anti-microbials.