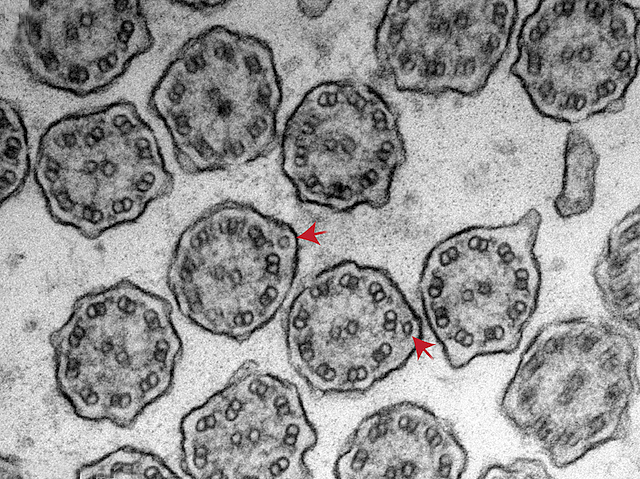 Like looking at a cross-section through a lettered stick of rock, these patterned circles are a cross-section view of tiny ‘hairs’ on the surface of lung cells, known as cilia, visualised with an electron microscope. The cells are from an Alaskan Malamute dog with a hereditary lung disease called primary ciliary dyskinesia (PCD), causing extra structures to form within the cilia (red arrows) and affecting their movement. Defective cilia can’t perform their usual job of sweeping out dust, mucus and infectious agents, leading to recurrent lung infections. Elsewhere in the body, immobile cilia can cause problems with fertility and brain development. By carefully analysing a dog family where two out of six puppies are affected by PCD, researchers have pinned the defect down to a gene called NME5. PCD can also affect humans, although the genetic culprit often isn’t known, so maybe NME5 is behind some of these cases too?