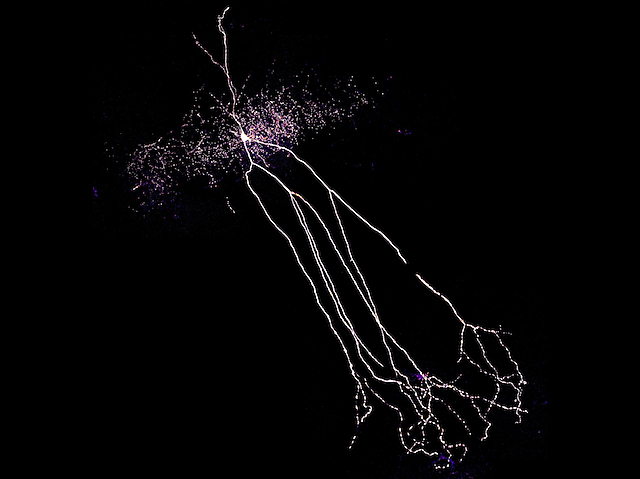 In the brain, signals take the form of electrical impulses, transmitted along and between neurons. Additional neurons also modulate these signals, boosting or dampening them to encode complex information, and forming elaborate networks. In patients with epilepsy, neuronal stimulation, or excitation, spirals out of control, disrupting the brain and causing seizures. Researchers investigating the hippocampus, a key brain area for epilepsy, recently made progress in understanding why this occurs, identifying a population of interneurons (one pictured) involved in a critical feed-back loop: when hippocampal pyramidal neurons are excited, they stimulate these interneurons, which in turn inhibit the same pyramidal neurons, keeping them in check. In rats with epilepsy, these interneurons malfunction, causing the pyramidal cells to become overstimulated, a phenomenon which computer models suggest leads to the patterns seen during seizures. Finding out why these interneurons fail is an important next step towards solving the puzzle of epilepsy.