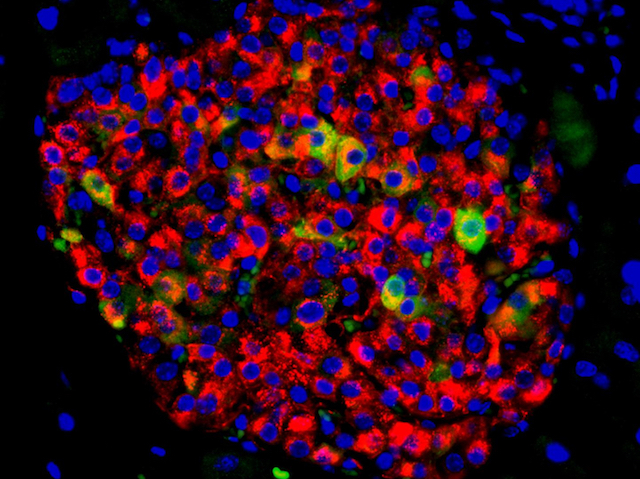 In type-2 diabetes, which is associated with obesity and older age, the body’s tissues stop responding to insulin – the hormone that regulates blood sugar. In turn, this can result in the death of the insulin-producing pancreatic beta cells themselves, such that patients need regular insulin injections. The image shows beta cells (red) in a mouse model of the condition with signs of damage and death (yellow and green). Scientists who use such model mice to study diabetes have recently discovered a protein, called adipsin that protects beta cells. Moreover, boosting adipsin in diabetic mice improved the animal’s symptoms long-term – their insulin levels were sustained and their blood sugar was better regulated compared with untreated mice. Excitingly, research shows that people with high levels of adipsin in the blood are less likely to develop diabetes than people with low levels, suggesting the mouse findings may ultimately translate to a human therapy.