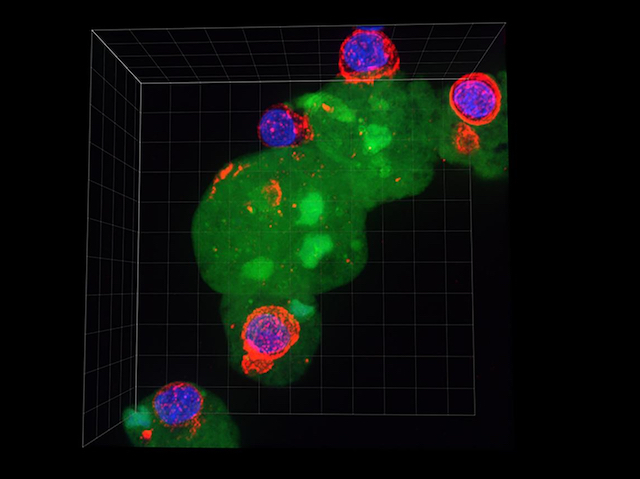 If my husband wears a pair of my earrings, there’s no chance anyone would mistake him for me – the beard is a dead giveaway (no, not mine). But, if a large amoeba (I’m no longer talking about my husband) adorns itself with tiny pieces of protein stolen from its human host, it can trick the immune system into thinking it’s part of the body. The bulbous green Entamoeba histolytica pictured, for example, is wearing, on its surface, proteins (red speckles) that the amoeba has nibbled from neighbouring human cells (blue and red). E. histolytica infects the human gut following ingestion of contaminated water or food and causes potentially deadly amoebiasis – characterised by diarrhoea, ulcers, gastric bleeding and, in severe cases, infection of other parts of the body. Understanding how this amoeba bedecks itself with host proteins to evade detection may reveal ways to uncover its disguise and eliminate infection.