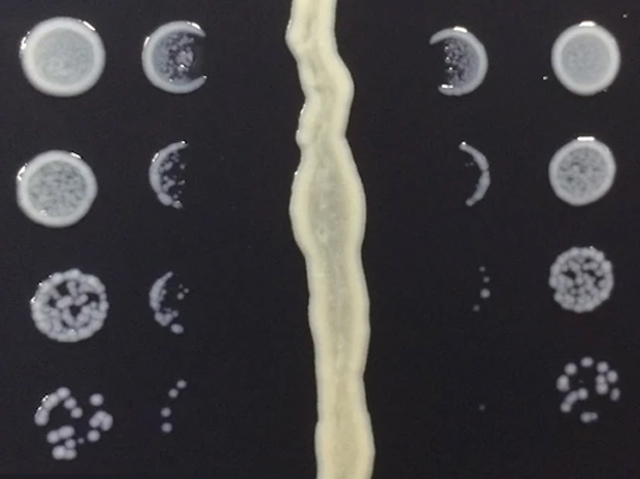 Legionnaire's disease bug secretes a molecule that could help its elimination

In bacterial communities, competition for resources can be fierce. Legionella pneumophila, the bacterium responsible for Legionnaire’s disease, a severe condition resembling pneumonia, shares contaminated plumbing systems with many potential rivals. While it produces no antibiotics or toxins to fight them off, it can still inhibit the growth of other Legionella species, using a molecule named HGA. On the plate shown here, HGA secreted from the line of L. pneumophila in the centre prevents the growth of other Legionella nearby. L. pneumophila is also sensitive to HGA, but a sophisticated mechanism protects it from self-harming: the bacteria become resistant to HGA when their population density is high, and only secrete it under those conditions, allowing them to safely eliminate competitors as needed. For its human hosts, removing Legionella from water supplies is an enduring challenge, but understanding how these bacteria interact with others could suggest new ways of tackling the problem.