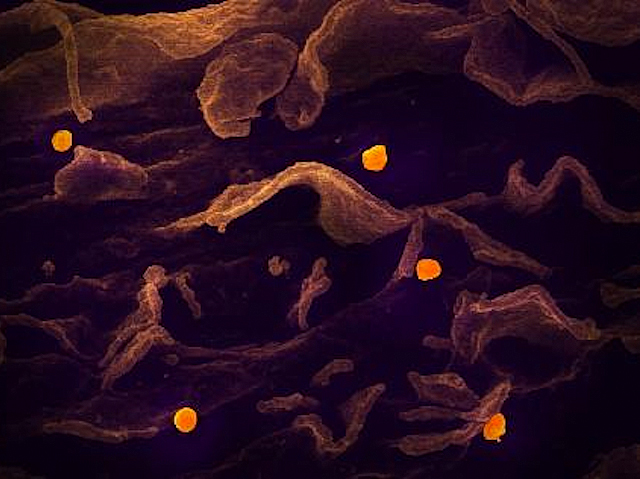 Occurring mainly in India and Bangladesh, the zoonotic Nipah virus (pictured, in orange, on the surface of a cell) can be transmitted from fruit bats to humans, and then between humans too. Symptoms include severe respiratory disease and inflammation of the brain, or encephalitis, often with fatal consequences, yet few treatments exist. Recent experiments found that remdesivir, a drug currently being tested as treatment for Ebola, could combat the effects of Nipah virus in monkeys. Twenty-four hours after receiving an otherwise lethal dose of Nipah virus, four African green monkeys were treated with remdesivir for twelve days; while some developed mild symptoms, all were eventually cleared of active virus, and survived to the end of the three month-long trial. How effective the drug would be if administered longer after infection remains to be tested, but these encouraging results suggest remdesivir could be a useful tool in fighting future outbreaks.