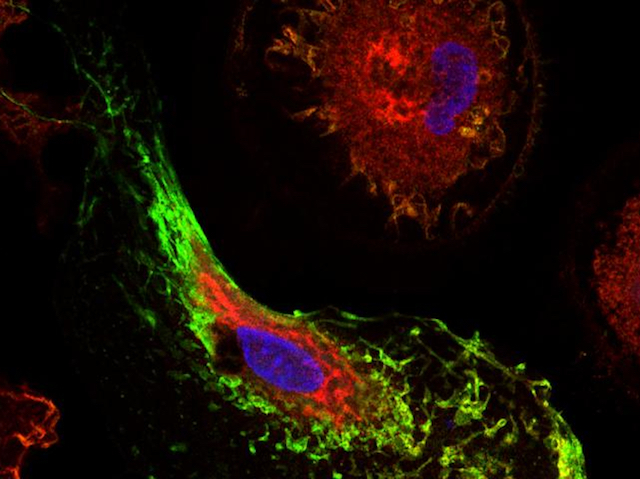 This human macrophage cell shows the presence of proteins TREM2 (red) and MS4A (green), both of which have been recently linked to Alzheimer’s disease and found to work together in the brain. The proteins are expressed in the brain’s microglial cells – a type of macrophage responsible for clearing cell debris and waste proteins to keep the brain spick and span. Although it’s not clear exactly how TREM2 and MS4A work, research indicates that the levels of soluble TREM2 released from microglia is correlated with Alzheimer’s risk – patients with high TREM2 levels in their cerebrospinal fluid have a lower risk of Alzheimer’s and vice versa – and, that variants of MS4A influence the production of this soluble TREM2. Importantly, silencing the MS4A gene in human macrophages reduces TREM2 production. This suggests that, if a protective role for soluble TREM2 in Alzheimer’s is confirmed, MS4A inhibition may be a potential treatment strategy.