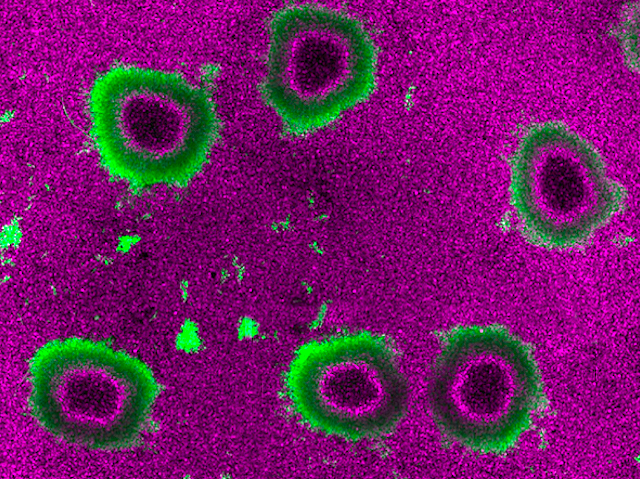 When bacteria band together to form near-impenetrable barriers called biofilms, treating infection becomes much harder. The biochemical side of biofilms is well-studied but less is known about the mechanical forces at work. Here a team investigated the forces created by biofilms of two bacteria — Vibrio cholerae which causes cholera and Pseudomonas aeruginosa which causes pneumonia. The bacteria were grown on hydrogels, artificial substances that mimic the softness of natural tissues. Measuring changes in the dimensions of the hydrogels allowed them to determine the forces generated by the biofilms. The biofilms buckled and transmitted these forces to the underlying hydrogels, as captured visually using fluorescence microscopy of the bacteria (green) grown on hydrogel (pink), with deformations at their core where the buckling occurred (black). Growing biofilms on epithelial cells revealed that the forces generated were enough to disrupt the layer of cells. These insights could therefore have implications for infection.