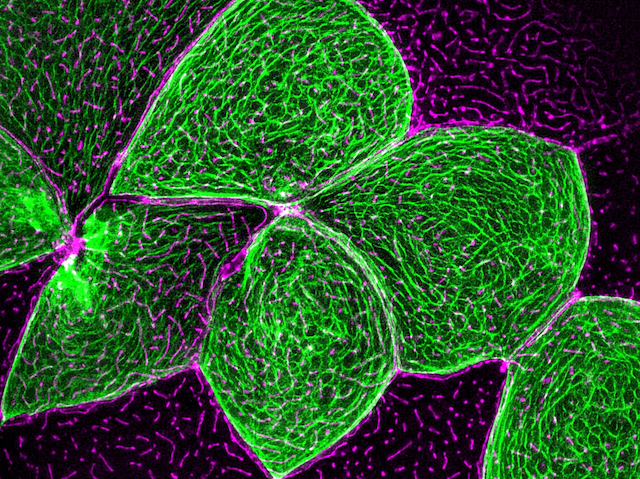 Forming a barrier between internal tissues and the outside world, the cells along body surfaces, from the skin to the inside of the gut, are known as epithelial cells. Many of these, such as cells lining the intestinal tract, are coated in mucus, keeping tissues moist and providing an extra layer of protection. To retain the mucus, the outer surface of these cells features minute protrusions resembling fingerprints, known as microridges. Investigating another mucus-covered surface, fish skin, is revealing how these structures are formed. Cell shape depends on the cytoskeleton, a network of three types of protein filaments: microtubules, actin filaments, and intermediate filaments, including keratin. Research on zebrafish skin cells (pictured), found that microridges are constructed by both actin (in magenta) and keratin (in green), connected by additional linker proteins. Understanding microridge formation could be relevant to health problems associated with mucus, from dry eyes to more serious conditions.