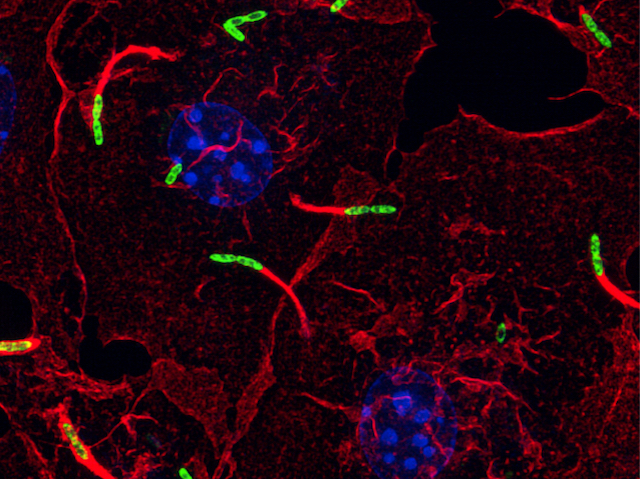 Insight into the intricate relationship between immune cells and infecting bacteria

Hijacking the host cytoskeleton is a popular pathogen trick, but the bacterium Burkholderia thailandensis takes this strategy even further. Once inside a host cell, B. thailandensis (in green) uses the host’s actin fibres (in red) to promote fusion with other cells, forming giant cells in which it rapidly replicates. Studying this behaviour in mouse macrophages, researchers uncovered how the immune system fights back: activated by type I interferon, molecules known as guanylate-binding proteins (GBPs) prevent the bacteria from manipulating actin, ultimately hindering cell fusion. Without GBPs, the macrophages are more likely to fuse when infected by B. thailandensis, and mice lacking GBPs are more susceptible to infection. Closely-related pathogens B. mallei and B. pseudomallei, which cause serious diseases in humans, also rely on cell fusion to spread, so unpicking this process in B. thailandensis is a useful step towards understanding their strategies.