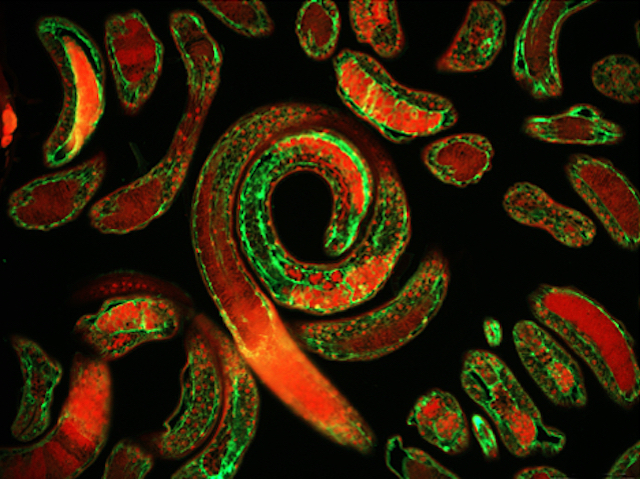 Potential strategy for an anti-roundworm vaccine

Anyone who has taken a risk on dodgy chicken wings from a lazily attended barbecue can tell you that improperly prepared food poses a threat to health. Trichinellosis is a disease more common in developing countries caused by the roundworm parasite T. spiralis, which sneaks into the body via undercooked meat, in particular pork. It is seen as a re-emerging threat, so researchers are investigating molecules that a potential vaccine might target. A new study looked at a protein, TsASP2 (green in the larvae pictured), and found it throughout the parasite body at each stage of its development. Preventing TsASP2 production stifled the parasite’s invasion of the intestine, and the further development of those that did settle in. If a vaccine could block the behaviour of this protein, it could prevent the parasite taking hold and provide protection for barbecue-goers and meat-eaters everywhere.