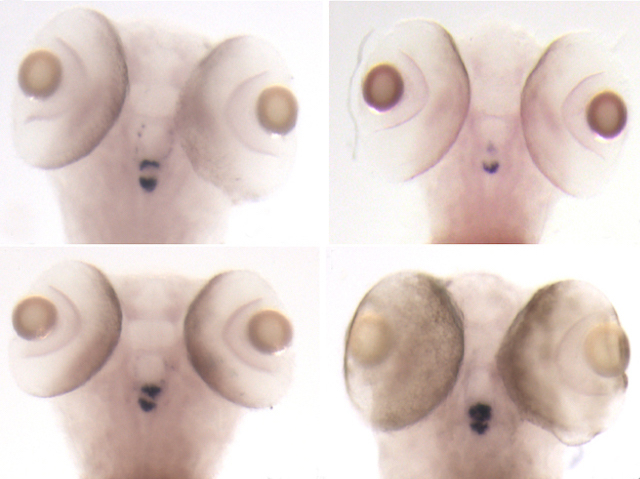 Understanding more about how tissues respond to low oxygen levels

These alien-like creatures are zebrafish larvae, just five days old. Their blue ‘lips’ are actually the developing pituitary gland, stained to reveal the activity levels of a gene called pro-opiomelanocortin (pomca for short). They’re helping scientists figure out the interaction between the response to low oxygen levels within tissues (hypoxia), which is linked to diseases such as asthma and rheumatoid arthritis, and anti-inflammatory drugs called glucocorticoids that are commonly used to treat them. The animal in the top left picture is genetically normal, while the top right one lacks a gene involved in the hypoxia response. The larva on the bottom left is missing a gene that responds to glucocorticoid drugs and the last one is lacking both. By measuring the impact of these genetic changes on pomca activity, researchers can start to tease out the interplay between hypoxia and glucocorticoids to develop more effective anti-inflammatory drugs in the future.