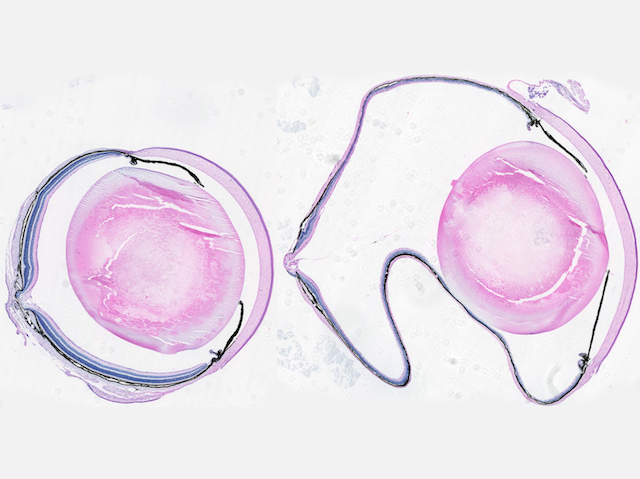 Insight into the genes involved in the eyeball-building process

Our eyes work by focusing light through the lens at the front of the eyeball onto a layer of light-sensitive cells (retina) at the back. Having eyeballs that are too small relative to where the lens focuses light results in far-sightedness. Some people are born with a fault in a gene called TMEM98, which causes a condition known as nanophthalmos – Greek for ‘very small eye’. This leaves them severely far-sighted and can eventually lead to loss of vision altogether. To find out more about how faults in TMEM98 affect eyeball size, researchers have been studying mice carrying a similar fault in the gene to that found in human patients. Curiously, the eyeballs in these animals are unusually large and misshapen (right) compared with healthy mice (left), rather than being abnormally small. The findings suggest that other genes are also involved in nanophthalmos, highlighting the genetic complexity of the eyeball-building process.