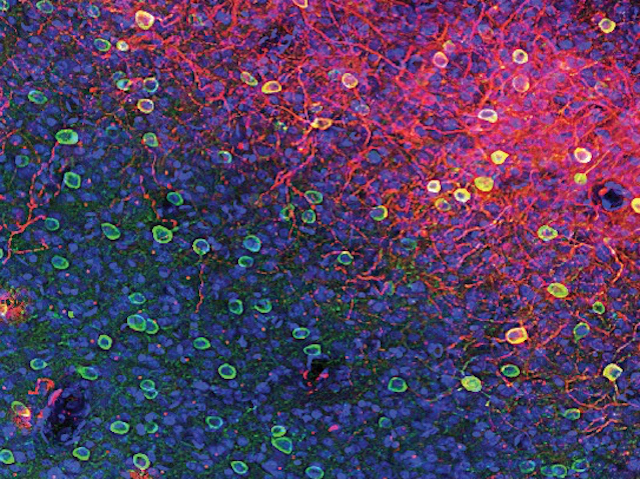 How exactly does the brain dictate behaviour? In the past, to answer this question neuroscientists would study the effects of damaging an animal’s neuronal networks on their behaviour. However, this approach is imprecise, irreversible, and the data can be difficult to interpret. A technique called optogenetics could provide a reversible alternative solution. By getting neurons to express light-sensitive proteins called channelrhodopsins, scientists can use light to directly control the electrical signals that neurons send to one another. Recently, neuroscientists used optogenetics to temporarily block communication between neurons in a visual part of the macaque brain (shown here with neurons in green, blue and red). The impact on behaviour was drastic, with monkeys’ visual sensitivity severely impaired in the corresponding part of their visual field. Importantly, these effects were short-lived, showing just how powerful and precise optogenetics can be as a tool for scientists to probe how neuronal activity mediates behaviour.