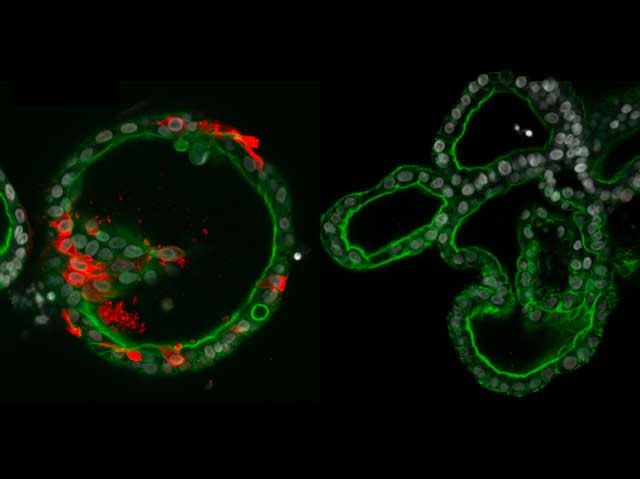 While many people worked from home to avoid SARS-CoV-2, virologists stayed in their labs investigating the virus to learn how to defeat it. Many of their studies were, and are, performed on cultured human cell lines, but because such cells lack the diversity and differentiation status of cells in the body, researchers also study virus biology in human organoid cultures – clusters of cells grown in more physiologically relevant, organ-like arrangements. Such studies have both confirmed findings from cell line studies – such as the fact that protein ACE2 is required for virus entry – and added to them. The organoids pictured for example reveal that SARS-CoV-2 (red) can only enter cells if the protein TMPRSS2 – a cell surface enzyme – is functional (left). The virus fails to infect when TMPRSS2 is dysfunctional (right). Such studies highlight not only TMPRSS2 as a potential target for COVID treatments but also the value of organoid studies.