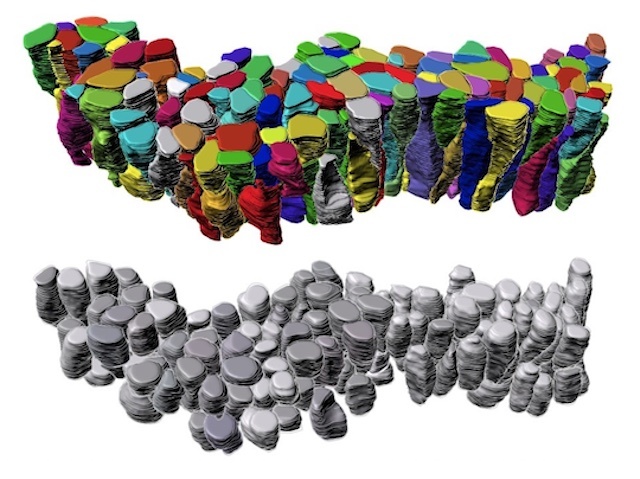 Dynamics of cells developing and organising into tissue analysed in 3D

Tissue development is sometimes a little like origami – a flat sheet of epithelial cells folding and remodelling into a complex tissue. Researchers have long studied the 2D interactions of these epithelial cells with their neighbours during this elaborate process. Now they investigate their 3D interactions using light-sheet microscopy of growing embryonic mouse lung tissue in dishes, subsequent data analysis called 3D cell segmentation (pictured) and physical theories. They found the epithelial cells (top) had irregular 3D shapes and often changed neighbours, both as they grew and during the cell cycle as their nuclei (bottom) moved up and down. However, the cells still followed established mathematical laws and rules of movement within epithelial layers and throughout the full thickness of the tissue. This reveals that although 3D organisation in epithelia is complex, it still follows simple physical rules. These insights will help better model epithelia in health and disease.