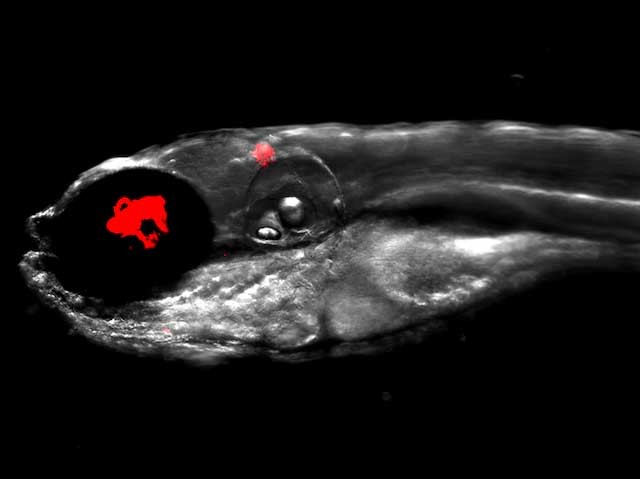 To fight the growing problem of antibiotic resistance, scientists are teaming up with the natural enemies of bacteria, viruses called phages. Focusing on Mycobacterium abscessus bacteria, which can cause serious lung disease, particularly in cystic fibrosis patients, researchers recently identified a promising weapon, a phage known as Muddy. Treatment with Muddy damaged colonies of antibiotic-resistant bacteria in culture, and reduced symptoms in infected zebrafish larvae (pictured, with bacteria in red, invading the brain). In a zebrafish model of cystic fibrosis, injections of Muddy phages after infection with antibiotic-resistant M. abscessus dramatically improved survival, especially when paired with an antibiotic: twelve days after infection, only 20% of larvae survived without treatment, compared to 40% with either phages or antibiotics alone, and 70% after combined treatment. With much still to learn about phage therapy, zebrafish provide a useful model to explore how antibiotics and phage can work together to defeat resistant bacteria.