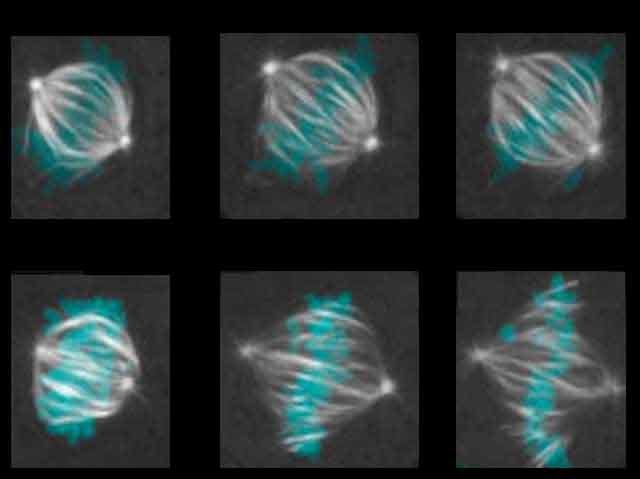 Throughout your life, your cells divide to replace worn-out ones and repair those which are damaged. This type of cell division, called mitosis, requires a parent cell to carry out complex choreography to produce its daughter cells. The performance is usually split up into four acts; prophase, metaphase, anaphase and telophase. One of the main stars of mitosis, is the spindle. Made from strong fibres from the cell’s ‘skeleton’, spindles capture, organise and pull apart the duplicated chromosomes that contain the cell’s genetic material. New research suggests that spindles owe their robust success to two motor proteins which generate opposing forces within the spindle. When these two proteins are doubly-inhibited, the spindle becomes mechanically fragile in the metaphase of mitosis (bottom row), and highly twisted and error prone in the anaphase. The top row shows the control spindle, its fibres coloured grey whilst the captured chromosomes are cyan.