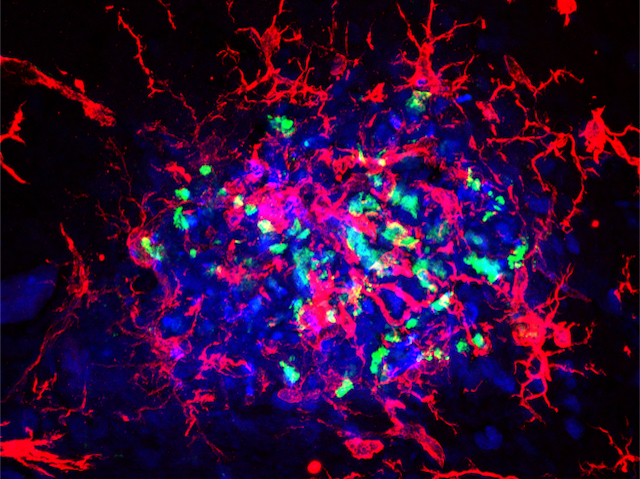 Although most infected adults experience few symptoms, Zika virus is a serious concern for pregnant women, as approximately 10% of children born after infection in the first three months of pregnancy suffer severe congenital defects. Infections later in pregnancy or in infants appear less devastating, but evidence of some serious conditions warrants further investigation. After infecting one-day-old mice with Zika virus, researchers found that, while most animals recovered within a week after experiencing symptoms, the virus persisted much longer. Zika virus could be found in localised spots in the brain over a year after infection, associated with signs of inflammation (pictured in a mouse cerebellum, with dying cells highlighted in green and active microglia, the brain’s immune cells, in red). Mice also displayed long-lasting symptoms, including a smaller cerebellum, impaired motor control, and hyperactivity, suggesting that infections early in life could have long-term consequences, which may require monitoring and treatment.