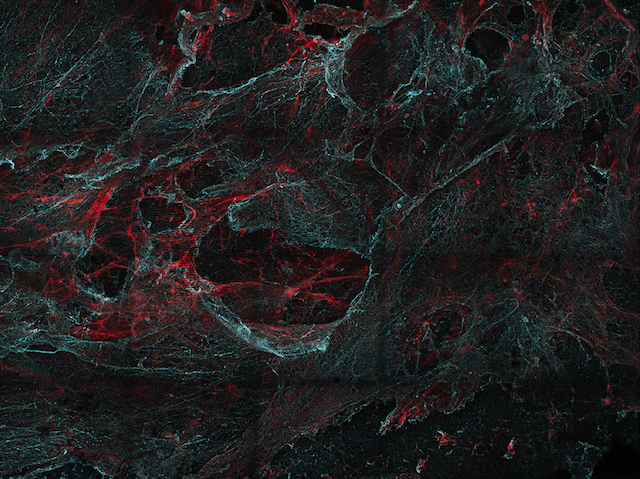 Understanding how bacteria survive in the depths of a biofilm

Have you ever been in such a tight crowd that it’s hard to breathe? Bacteria in their microscopic equivalent – the bottom of a biofilm, a molecular pile-on formed as populations swarm together – withstand the pressure, but their survival tactics are unclear. Biofilms give bacteria persistent purchase on substances and boost the harm they cause. Researchers need to understand how those at the bottom ‘breathe’, to help prevent bacteria such as P. aeruginosa, which commonly infects patients already in hospital, taking hold. They studied molecules known as phenazines, previously shown to be essential for biofilm formation, and discovered that they bind to fragments of genetic material floating loose in the film (pictured, blue; red shows DNA inside bacteria), remnants of dead bacteria that have spilled their contents. These structures shuttle particles in a relay chain between the bottom-dwelling bacteria and fresher surface. Cutting this supply chain could help stamp out infections.