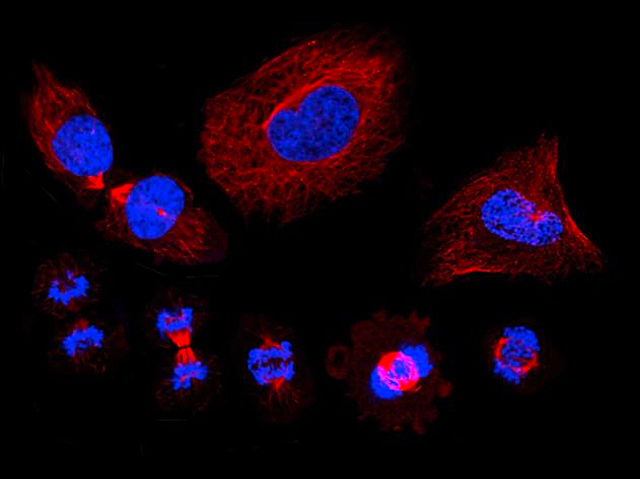 Cell division is an essential process underpinning the development, maintenance and repair of our tissues. Collectively forming the cell cycle, the stages of cell division are shown here in a montage of microscopy images: from left to right, a dividing cell’s nuclear DNA (in blue) condenses into chromosomes, later pulled apart by a network, or spindle, of fibres called microtubules (in red), ultimately forming new nuclei in two daughter cells. Uncontrolled cell division leads to cancer, so understanding cell cycle regulation is critical. To that end, researchers have mapped the changes in protein expression across the cell cycle, using a combination of microscopy and sequencing techniques. Highlighting the complexity of human cells, they found that around 20% of all proteins varied in their level of expression between genetically-identical cells. They also identified over 300 new proteins associated with the cell cycle, providing an abundance of leads for future research.