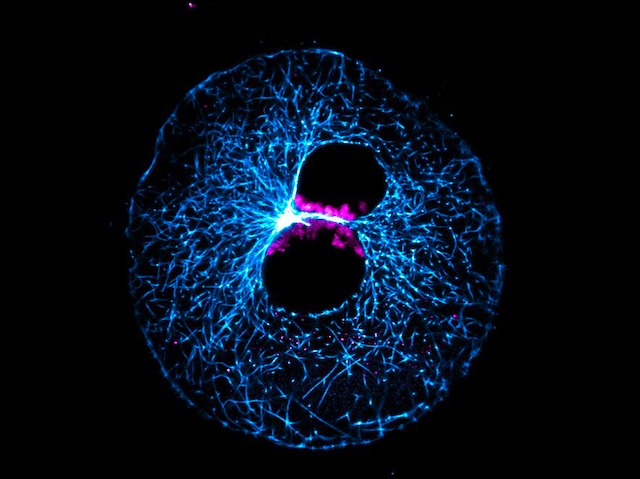 Most human embryos fail to develop to term, often because they carry the wrong number of chromosomes, a condition known as aneuploidy. Approximately 50–70% of human early embryos are estimated to be aneuploid, and while some issues occur within the egg itself, something else must be causing such high levels of complications. Working with human and bovine embryos, which also experience this problem, researchers identified a crucial moment when errors arise, at the zygote stage, immediately after fertilisation (pictured, in a bovine embryo, with the cytoskeleton in blue). When the separate pronuclei carrying parental chromosomes (in pink) come together, the chromosomes gather at the pronuclear interface, but as the cytoskeleton orchestrates these complicated movements, this clustering step can easily go awry, causing chromosomes to go missing in subsequent cell divisions. A major cause of miscarriages and infertility, understanding this process could also help improve the selection of healthy embryos for fertility treatments.