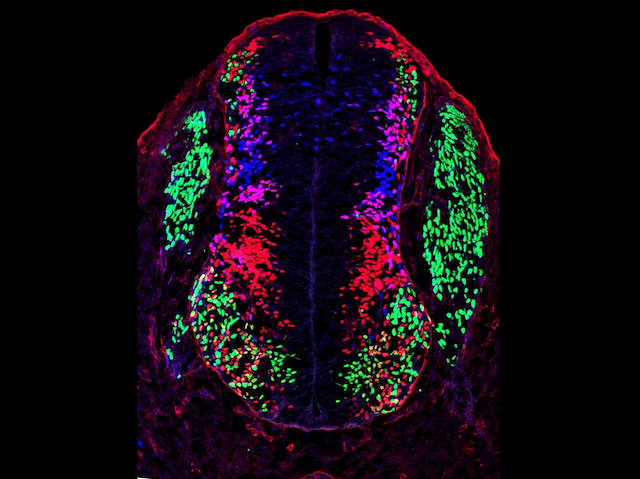 Gene expression involves two key stages: transcribing a section of DNA into an mRNA molecule, then translating that into a protein. The process is modulated by sophisticated regulatory systems, including microRNAs (or miRNAs), small segments of RNA that bind to mRNAs to inactivate them. miRNAs are known to be crucial for development, but identifying their specific roles is complicated. In the spinal cord, distinct types of neurons (shown in different colours in this cross-section from a mouse) are distinguished by the genes they express, and miRNAs are involved in this differentiation. In mice, recent research found that the loss of six miRNAs, the Mi34/449 group, alters the pattern of gene expression in spinal cord neurons, affecting their neural circuits. Mice lacking Mi34/449 also have external symptoms, such as unusual posture and greater heat sensitivity, providing an example of how miRNAs can help define cell populations, with far-reaching consequences for behaviour.