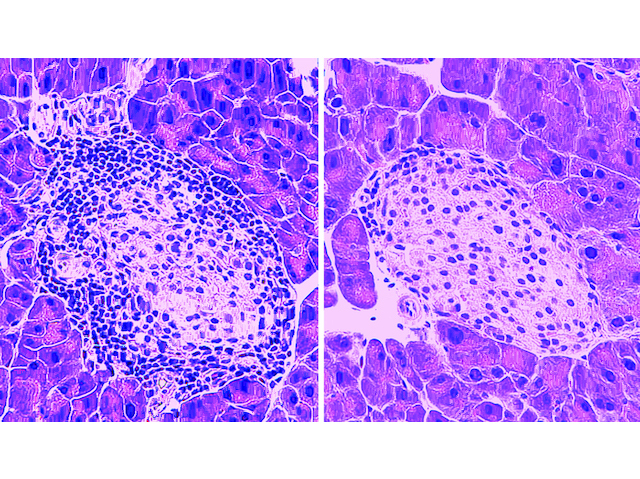 Type 1 diabetes occurs when the body’s immune system attacks its own pancreatic islet cells – specifically the beta cells, which produce insulin. The pancreatic islets of mice with a version of type 1 diabetes are shown above. On the left, the animal’s T cells can be seen crowding into the islet to destroy the beta cells, while on the right far fewer T cells are present. That’s because the animal on the right had been receiving daily injections of a recently discovered mitochondrial protein called MOTS-c, which possesses T cell regulatory activity. Animals treated with MOTS-c had preserved insulin production and improved blood glucose levels compared with controls. They also had significantly delayed onset of diabetes or no diabetes at all. The discovery that patients with type 1 diabetes have unusually low levels of MOTS-c suggests novel treatments aimed at boosting the protein’s activity may be of clinical benefit.